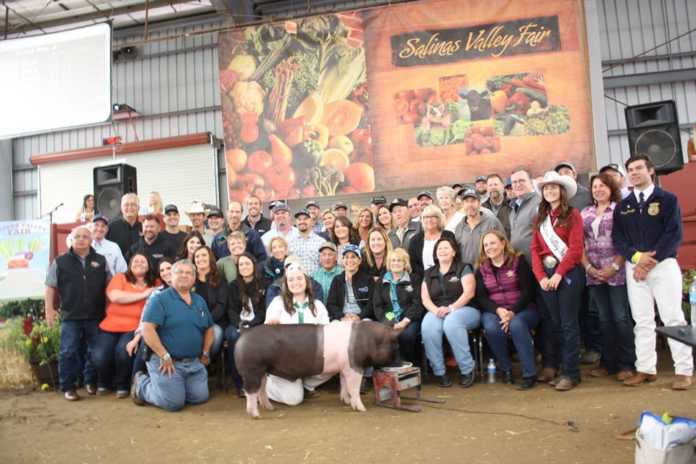 A record total of $2.2 million was raised altogether at the May 19 auction. Heritage Foundation member Jessica Harris announced the proceeds would be able to finish paying off the $1.5 million loan for the Fair’s Orradre Building.

“Our next project will be updating the Heritage Room and the maintenance shop,” Harris said. “We will have more room for members going forward.”

Burgess, a junior at Salinas High School, is this year’s Heritage Foundation scholarship winner. Her hog was donated by Debbie Soares.

“My favorite part of the fair is showing because I get to show off my pig and how hard I’ve worked for it,” Deniz said. “This is my first year so I’m kind of a little nervous but trying to work for it so next year I can do a little better.”

Saray Valdez, also of King City FFA, showed a pig named “Toby,” however, this is her second time showing a pig.

“I’ve learned how to control my pig more,” Valdez said. “Last year I struggled and it was really difficult. You just learn more like how much you should feed it, and about how to care for it.”

Samantha Santos of Gonzales High School FFA took a swine project to the fair. Santos sees a family vibe coming from showing animals at the Salinas Valley Fair because everyone is helpful.

Animals at the Salinas Valley Fair, including chickens, goats, sheep, steers and pigs, go through showmanship where the awards are based on how well a FFA member of 4-H member works with their animal. Market is based on the animal and how it looks.

“Showmanship has always been a huge thing for me,” said Alicia Massa, a member of Soledad High School FFA. “My mom was a showman and ever since I was 4 years old I wanted to show an animal. I finally joined 4-H and I started off showing rabbits, and then moved on to pigs my freshman year with FFA.”

“I’ve always loved animals and just being around animals makes me a better person,” Canchola said. “My anxiety is calmed and everything just feels OK.”

“I saw my sisters show pigs and I would beg them to let me come with them to help,” said Castro. “I was so excited that I was going to be in high school and I could finally show a pig.”

This is Castro’s first pig with the Salinas Valley Fair.

Carolina Martinez of Greenfield High School FFA is in her last year of showing an animal at the Salinas Valley Fair.

“My favorite thing about showing is getting the experience with the judge and how he judges everyone in a good way,” said Martinez.

Ana Acosta, also in her final year of showing with Greenfield FFA, said, “My favorite part is the auction because I get to see everyone who’s supporting and enjoying my last few moments with my animal.”