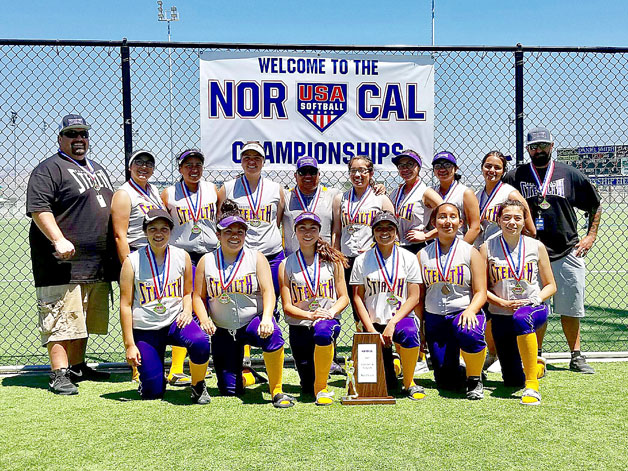 SUNNYVALE — The South Valley Stealth softball team placed third in the 16 and under B Division at the Northern California Qualifying Tournament this past weekend at the Twin Creeks Softball Complex in Sunnyvale. The Stealth completed the tournament with a 3-2 record.

“We did well in the tournament and only made four defensive errors all weekend,” said Stealth head coach Joel Ramirez. “Our next tournament will be the NSA Qualifier in Southern California.”

In Friday’s first game the Stealth were beaten 10-6 by the South Bay Quakes. Alize Duarte pitched the entire game and took the loss. Evelina Ramirez, Alynna Quesada, and Miranda Zuniga had multiple hits in the game. Zuniga was credited with a two runs batted in on a bases loaded double.

On Saturday the Stealth got on the win column with a 14-0 shutout by Duarte over the San Jose Quicksilver. Elena Meza went 3 x 3, Celeste Parra went 2 x 3, Jenny Garcia went 2 x 3, and Ashley Ramey went 2 x 3. In the third game of the tournament the Stealth Duarte earned a 17-0 shutout victory against the North Monterey County Raptors. The game was called after three innings on the Mercy Rule. Andrea Pantoja went 3 x 3 with four RBI’s and a homerun. Celeste Parra was 2 x 2 and Jennika Landeros went 2 x 3. Parra, Ramirez, and Pantoja scored three runs apiece.

The Stealth won their third straight game, defeating the Hollister Black Jacks by a 6-4 score. South Valley won the fourth game of the tournament with double by Evelina Ramirez in the sixth inning. Contributing hits were Ariel Carrillo, Jenny Garcia, and Celeste Parra. The win sent the Stealth to the elimination semi-finals against the San Jose Quakes where they were defeated 8-7 on a walk-off homerun in the final inning.

South Valley trailed 3-1 and then came back to take a 7-5 lead late in the game. San Jose tied the game in the bottom of the fifth at 7-7 and clinched the win in the seventh. Pantoja, Parra, Quesada, Garcia, and Landeros all went 2 x 3. Landeros clubbed a homerun. Ashley Ramey started at pitcher for the Stealth.