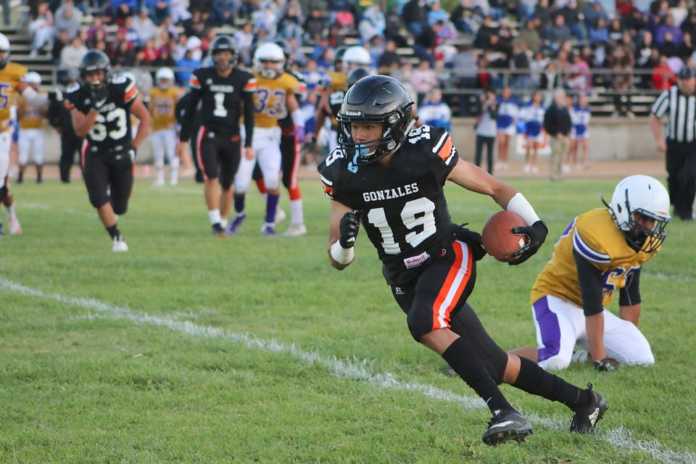 Eight teams were on display as the JV teams from Gonzales, Greenfield, Soledad and King City began the jamboree action followed by the varsity jamboree.

The JV portion of the jamboree started off on a happy note as injured Spartan player Angel Bravo led the Gonzales team on the field. Wearing a special helmet that he must wear to protect his head, Bravo stood out on the field with his No. 24 jersey and his blue helmet.

“The team was happy to have Angel there as he is their captain and their leader,” said Gonzales head JV coach Tony Garcia. “He made the kids play better because he is a great motivator.”

“Overall I’m happy with the effort from the boys,” said King City head coach Mac Villanueva. “We came out healthy and we did some good things tonight. We have a better gauge now of where we are and what we need to work on moving forward. I think our quarterbacks Jonah Mendez and Mitch Slama played well. We kept it very simple tonight and they did a good job leading the offense.”

“I was impressed, yet satisfied with our team’s performance,” Berlanga said. “For a young group, we came out and competed. We definitely have to improve in certain areas for us to take the next step and that’s up to our staff to do that. I have a hungry group of kids who want to leave their own legacy.”

Greenfield’s Adam Barsenas begins his second year as the head coach of the Bruin varsity football team. Barsenas was pleased with what he saw from the Bruins at the jamboree in Gonzales.

“We wanted to see what our depth was like, and we liked what we saw,” Barsenas said. “We played physical and disciplined football. Offensively senior running back Nathan Medina had a good night and scored a touchdown. On defense, safety Jose Hernandez was a standout and had an interception.”

Soledad second-year head coach Eric Rodriguez praised the players that had stepped up for the Aztec varsity in the games with Gonzales, King City and Greenfield.

“Friday night was a good evaluation for all our athletes on the team to see where they’re at and what we need to improve on,” Rodriguez said. “Quarterback Damian Mejia looked good running the ball as did Nathan Aldrich. Middle linebacker Jacob Olivas played well, and defensive ends Angel Villalobos and Roman Barragan had good showings.”

This week the non-league schedule begins for the local football teams. Tomorrow night the King City Mustangs travel to Watsonville to play the St. Francis Sharks. The Bronco JV game will start at 5 p.m. followed by the varsity contest at 7 p.m.

On Friday the Greenfield Bruins take a short ride to Soledad to battle the host Aztecs with the varsity game slated to kick off at 7:30 p.m.

Gonzales has a 7:30 p.m. game scheduled for Friday against the Alisal High Trojans in Salinas. The Spartans host Soledad on Sept. 6 in the Heritage Trophy Game, and on the same night King City will host Greenfield.

GONZALES — Gonzales High School Athletic Director Todd Buller announced that June 30 was his last day with the school, as he heads off...
Read more

Letter to the Editor | In Response to Capitol Letter