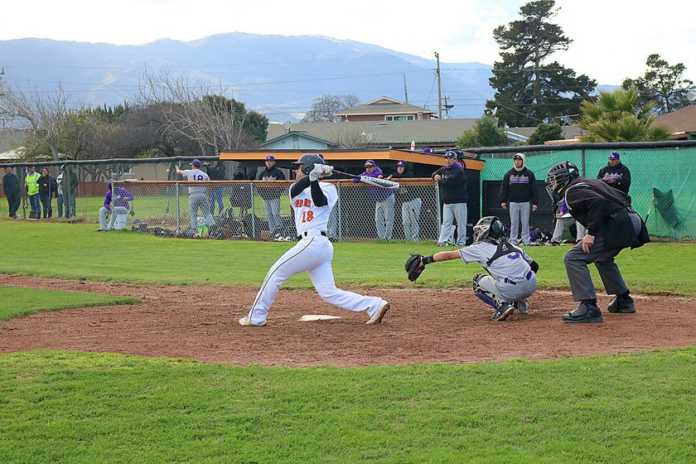 Photo by Valeria Reyes
Xando Mendez of the Gonzales baseball team takes a cut at the baseball last week against the Soledad Aztecs.

SOUTH COUNTY — The Gonzales and Soledad High baseball teams won on the road and lost at home in their Mission Trail Athletic League games last week. Soledad traveled to Gonzales on March 14 and beat the Spartans by an 8-1 tally.

Andru Holguin earned the pitching with six innings of work. Joseph Calderon hit a triple and went 2 x 4 at the plate. Chris Villarreal and Andrew Alonso went 2 x 4 and Anthony Ramirez was 2 x 3 with a double and two runs batted in. Frank Parra contributed to the Aztec offense with a base hit.

The next day in Soledad Xando Mendez earned a seven inning pitching victory for the Spartans. Giovanny Garcia led Gonzales with three hits and had two RBI’s and Vidal Franco was credited with two RBI’s.

On March 14 the Padres defeated the Bruins by a 13-2 score. Jesus Soto hit double for Greenfield and had an RBI. Agustin Pantoja started the game on the mound for the Bruins. In the second game of the series the Padres shutout the Bruins 5-0 at Carmel. Andres Espinoza hit three singles to lead the Greenfield hitters.

King City defeated Trinity Christian 6-1 on March 12. Armando Pina won the game on the pitching mound and finished with seven strikeouts. Jeovani Santoya led the Mustangs with three hits and two RBI’s. In  games this week Soledad begins a series with Trinity Christian; Gonzales starts and the road in Marina and hosts the Mariners tomorrow; Greenfield has a pair of games with Stevenson; and King City played at Pacific Grove yesterday and will host the Breakers tomorrow afternoon.

SOLEDAD — Soledad High boys and girls soccer teams began the season on a winning note, as the girls team started with a 9-0...
Read more