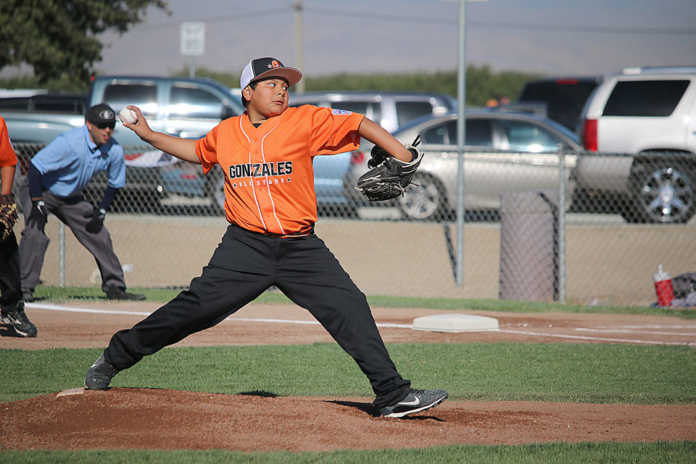 SOUTH COUNTY — Two teams from King City, two teams from Soledad and one team from Gonzales have qualified to play in the semifinals of the California District 9 Little League All-Star Playoffs. King City will be represented by the 9- to 11-year-olds team and the Junior All-Star team. Soledad has a team in the 7- to 9-year-olds division and the 8- to 10-year-olds division. Gonzales Little League has their 11- to 12-year-olds Major Division in the semifinals.

Soledad and Gonzales were tied at 2-2 late in the game when Aaron Flores of Gonzales hit a three-run homer and secure a 5-2 win. Stevie Madrigal started the game at pitcher and received relief help from Noel Carrillo.

“In our last two games our players were hitting everything,” said Gonzales Manager Fidel Gudino. “Jaime Arroyo was our leading hitter against Continental and in the game with Manzanita Aaron Flores threw 72 pitches with 10 strikeouts. I feel good going into the semifinals because our kids have worked hard. As long as we keep playing this way I think we should be OK the rest of the tournament.”

Soledad completed the 11-12 tournament with a 2-3 record as they recovered from the tough loss to Gonzales with 13-3 win over Manzanita and a 13-7 win over Ferrasci.

“Gonzales was up 2-1 until Christian (Camacho), hit a homerun to tie the game at 2-1,” said Soledad Manager Chris Camacho. “We had men on base after that but couldn’t get another run. We took the lead right away with Manzanita with a homerun by Christina and another by Zac Alvarado. Daniel Raso pitched three innings, Zac Alvarado threw two innings, and Gregory Diaz threw one in the fifth. Jaden Blanco had two hits and Noe Fregoso had three hits.”

The King City Major team (11-12) completed the tournament with a 2-3 record beating Manzanita 2-1, losing 5-2 to Ferrasci, and 5-4 to Continental in their final game on Saturday.

The King City 9-11 year-olds team finished 4-1 in Pool play and will play Hollister-National, the winners of Pool A tomorrow at 5:30 at Atlantic Little League. King City beat Ferrasci last week by an 11-7 score and ended the week with a 6-0 shutout win over Soledad.

“During the tournament we have been led in hitting by Eddie Chavez, Jose Aguirre, Vince Godoy, Jarod Tognetti, and Gerardo Rangel,” said King City Manager Vince Godoy Sr. “The same guys have been our leaders as pitchers. In the game with Ferrasci Vince hit a three-run homer and Gerardo had a double. Against Soledad, Vince hit a two-run homerun and Jared had a triple.”

“It is pretty unbelievable how well our team is playing right now,” said Soledad Manager Henry Tavarez. “As long as the kids continue to play at this level we feel pretty confident going into the final games.”

Soledad plays Continental tomorrow at 5:30 at Atlantic and with a victory will play the winner of the game between Hollister-American and Hollister-National on Saturday at Ferrasci at 11 am.

The Soledad 7-9 year-old All-Stars took second in their pool and will play Hollister-American tomorrow at 5:30 in King City. A win would send Soledad to Saturday’s championship final on Saturday against the winner of Hollister-National or Atlantic at 8:30 a.m.

“Even though our players are young we treat them as athletes and not just kids,” said Soledad Manager Cesar Lopez. “Ethan Sanchez, Nathaniel Raso, Zaryk Alvarado, and Damian Lopez are pitching really well. Offensively we have scoring lots of runs. We finished the pool at 3-1 but we feel we can beat any team we play.”

In the Junior Little League Division King City played Ferrasci yesterday at Manzanita and the winner will play against the winning team from the National and Atlantic game tomorrow at 5:30 at Manzanita.