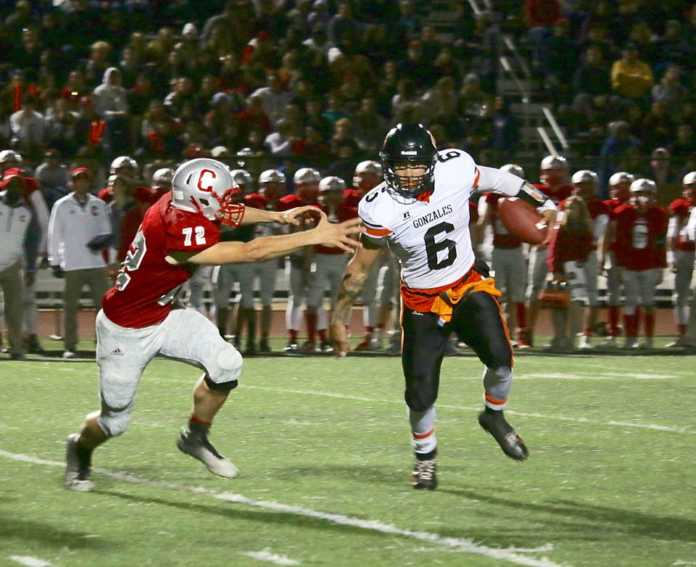 GONZALES — A magical season ended at Monterey Peninsula College for the Gonzales High football teams as they were beaten 57-14 last Saturday by the Carmel Padres in the Central Coast Section Division V semifinals.

Gonzales kept the game close until late in the first half when the Padres outscored the Spartans with a three-touchdown scoring run.

“When the score was 14-6 I felt that we were in the ball game and we could get things going our way,” said Gonzales head coach Arthur Berlanga. “There were at least three times in the first half that the ball was fumbled and we just couldn’t come up with it. We hurt ourselves with penalties that had us going backwards and out of scoring range. It was two league championship teams playing for the right to go on and we just ended up not making the plays we needed to stay in the game.”

After being stopped on their first drive, Gonzales quarterback Raul Morales punted the ball and the Spartans recovered at the Carmel three-yard line. The Padres used the running of Dakota Mornhinweg to quickly move the ball up field. A 38-yard run by Mornhinweg gave the Padres a first down on the Gonzales 38-yard line. On the next play, Mornhinweg displayed his speed and rushed in for a touchdown with 6:05 remaining in the first quarter. Carmel’s Nioco Staehle booted the PAT and the Padres led 7-0.

Carmel took a 14-0 lead at the 3:25 mark with a touchdown run of three-yards by Mornhinweg and a PAT by Staehle. Gonzales cut the lead to 14-6 with a touchdown by Payton Flores of two yards. The Spartans had the PAT blocked.

After a good return on the kickoff, the Padres set up a five-yard score by Mornhinweg and the third PAT by Staehle to take a 21-6 lead with 3:52 left in the first half.

The final two minutes were torture for the Spartans and their fans as the Padres took a 28-6 lead on another run by Mornhinweg. Minutes later Morales went for a deep pass play attempt to Dominic Emery, but the ball was picked off by the Padres’ Rashaan Ward. Carmel was backed up on a penalty but quarterback Kai Lee found Ward open on the sideline and the 100 meter champion ran in for a 50-yard touchdown. Staele then completed the play with his fifth PAT of the half that gave the No. 1 seeded Padres a 35-6 advantage at halftime.

“The pass that was picked off was just a little off line,” Berlanga said. “We needed a score just to get cut into the lead. Carmel made us pay for it by scoring right away. At halftime I just reminded our players to just keep playing our style of football, make plays and not give up on each other. The game might not go our way, but that did not mean we could not work to play good football.”

Gonzales finished the game with an eight-yard touchdown run and two-point conversion run by Morales for the final 57-14 final. Morales led Gonzales with 160 rushing yards, and Flores finished with 116 rushing yards. The Carmel defense limited the Spartans to just 17 passing yards.

“We had good performances by Pablo Villasenor, Raul (Scooter) Morales, Payton Flores and Jose Lopez at fullback and linebacker,” said Coach Berlanga. “Carmel is a very good team and we were not going to get to the next game without playing a good team. I told my players, and especially our seniors that I thank them for giving their all to me and our coaching staff and that they laid the foundation for our program with their efforts this season. We will be losing 13 seniors from this team, but we will also have some good players returning for next season.”

GONZALES — Gonzales High School Athletic Director Todd Buller announced that June 30 was his last day with the school, as he heads off...
Read more

Retiree reflects on half-century of agricultural work in Salinas Valley

Letter to the Editor | Trump Handled Tragedy All Wrong