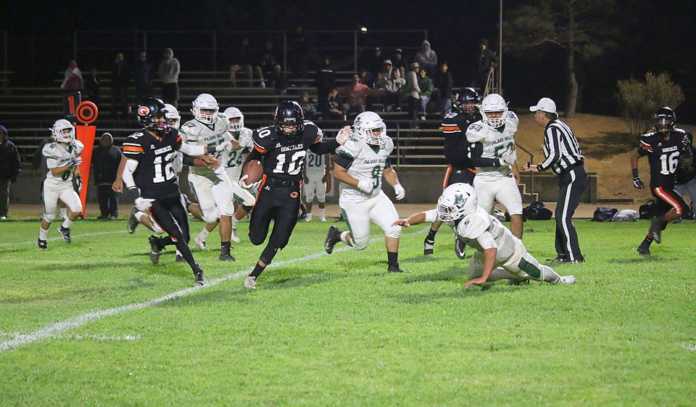 GONZALES — Playing in front of a supportive Homecoming crowd, the Gonzales High football team erupted for 19 unanswered points in the second half to defeat the Pajaro Valley Grizzlies, 40-20, on Friday night at Dick Force Stadium. The Grizzlies kept the game close in the first half and just trailed by a score late in the contest.

Pajaro Valley sent a message to the Spartans that they had come to play as on the first play from scrimmage running back Russell Pablo dashed 55 yards to the end zone to give the Grizzlies a 6-0. Gonzales kept the extra point off the board with a block on the PAT by linebacker Nael Vasquez.

The Spartans answered the Grizzlies score at the 6:40 mark of the opening quarter with a 15-yard scoring run by Payton Flores. Franky Cisneros nailed the PAT that gave Gonzales a 7-6 lead. With the Pajaro Valley running backs running for chunks of yardage on their next possession to reach the Gonzales 13-yard line, Joel Valdez picked up a fumble and returned the ball for an 87-yard Spartan touchdown. The second PAT from Cisneros had the host team up 14 to 7.

The teams traded touchdowns the rest of the half as Pablo cut the lead to 14-13 with a one-yard run with 11.9 remaining in the quarter.

In the second quarter Jayson Flores gave Gonzales a 20-13 advantage with a seven-yard pass play for a touchdown by quarterback Raul Morales. Cisneros added the PAT to make the score 21-13.

Pajaro Valley cut into the lead with less than five minutes left in the half with a seven-yard touchdown run by Carlos Hernandez. A successful PAT had the Grizzlies trailing by a single point at 21-20. An outstanding run by Payton Flores had the Spartans moving towards the red zone on their last possession of the first half but penalty flags negated the play and sent the teams off for the halftime intermission.

“We had made some adjustments as the first half was ending that helped us to slow down Pajaro Valley,” said Gonzales head coach Arthur Berlanga.

At the start of the third quarter the Grizzlies moved the football and to the Spartans side of the field and then benefitted from a 15-yard unsportsmanlike penalty that gave them a first down at the seven-yard. Gonzales then played some hard-nosed defense and allowed just one yard on three plays. Pajaro Valley then attempted a field goal but the ball sailed wide left and gave the ball to the Spartans.

Gonzales went the run, which meant getting the football to Payton Flores. The Spartans earned a few first downs then Flores did the rest by scoring a seven-yard touchdown run. After the third Cisneros PAT, the home team led 28-20. In the fourth quarter the Spartan defense stopped the Grizzlies to force a turnover on downs.

Gonzales marched quickly down the field and reached the seven-yard line where Morales called his own number and flew into the end zone but a shower of flags sent the Spartans heading the other way. On fourth and long and out of field goal range Gonzales chose to take a shot at the end zone. Morales then threw the ball to Jayson Flores who outfought two Grizzly defenders for a 20-yard score. Cisneros missed the PAT but the Spartans had a two touchdown lead at 34-20.

The Spartans ended the game with the third score from Payton Flores on a 14-yard run. The second missed PAT of the half did not matter much as the Spartans downed Pajaro Valley 40-20.

“We know that every team will be out to try to beat us now,” said Berlanga. “This week we will be playing Marina High School and they have some good athletes at quarterback and the leading receiver in the league. I feel we have the athletes to match up with anyone and we are exciting to be able to play at a junior college facility at Monterey Peninsula College on Friday.”

With the victory, Gonzales improved to 2-0 in the Santa Lucia Division of the Pacific Coast Athletic League and 5-0 overall.