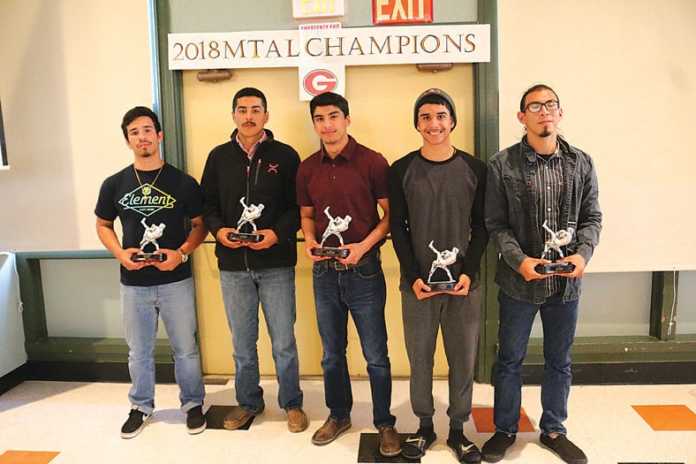 GONZALES — On Wednesday, May 9 the Gonzales High School wrestling program hosted an awards night and banquet at the school cafeteria.

The Spartan team, coaches, and parents gathered for a meal of tri-tip, baked potatoes, and dessert followed by presentations of scholar-athletes, special team awards, and league championship awards and certificates.

After dinner a slide show featuring the championship effort by the Spartans that resulted in the school’s third straight Mission Trail Athletic League title was played for the audience. Head coach Larry Rodriguez then took the floor took time to honor former Gonzales wrestler and Olympic Silver medalist in power lifting, Mario Martinez.

“Mario started right here in Gonzales as a member of the wrestling program,” Rodriguez said. “I made the mistake of challenging him to wrestle and he showed how much power he had on the mat.”

Rodriguez and assistant coaches Sandra Rodriguez and Sean Hileman then introduced the team followed by certificates for scholar-athletes from the Gonzales High and from the Central Coast Section. The Spartans had 15 wrestlers with a grade point average of over 3.0 to earn school awards. Seven wrestlers for the Gonzales team received certificates from the CCS for GPAs of 3.5 or higher.

Team captain Robert Ochoa presented a gift from the team to Hileman who will be leaving Gonzales High at the end of the school after serving as a coach and math teacher. Ochoa also presented a special plaque to Gonzales High Athletic Director Bo Bueller that pays tribute to the accomplishments of the Spartans in the last three championship years. Ochoa presented Larry and Sandra Rodriguez with a plaque for their hard work with the program.