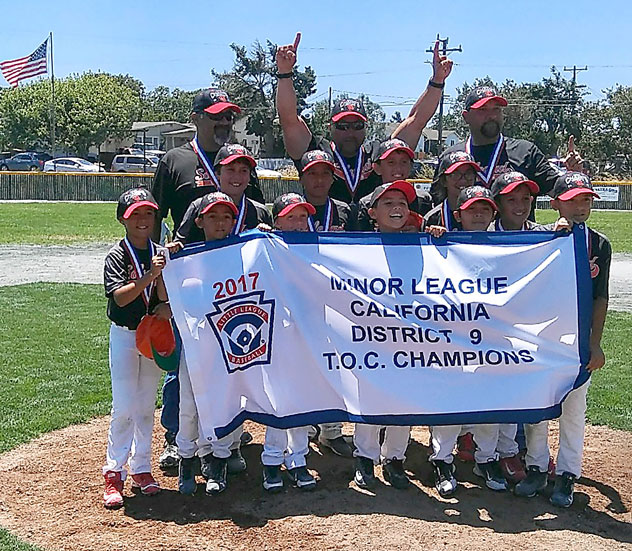 SOLEDAD — On Sunday, June 18, the Soledad Minor Giants won the Tournament of Champion Minor title, beating Hollister-American 18-6 in the finals. The Giants won the Soledad Little League championship and topped that feat by winning TOC and finishing with a 21-1 league record and 25-2 overall record.

“It was a great feeling to win the TOC,” said Giants Manager Henry Tavarez. “We have a talented team and they took it to the next level in the tournament. After a first-round bye we lost by a 4-1 score to Hollister-American and then ended up playing them to win the title. Our players stepped it up when they had to.”

The game was tied at 6-6 until the sixth inning when the Giants exploded for 12 runs to run away from their foes.

“Everyone just started hitting the ball in our last at bat,” said Taverez. “The offense just came alive for us. Anthony Medina was the winning pitcher and received relief help from Daniel Valenzuela. Winning the TOC felt really good because this year we had a blind draft to start the league and so it was pretty fair across the board. We had many first time players and they developed into pretty good ball players. In the TOC tournament Anikan Tavarez was our leading hitter and went the whole tournament without striking out. Alfredo Aguilera was a solid leadoff batter and we had many good pitchers on the team.”

Serving as assistants on the Giants this season were Bobby Alvarado and Ernesto Felix.

On Saturday Soledad began the All-Star Tournament with a 24-8 win over Manzanita at Hollister Little League. Manuel Sanchez-Vega and Omar Lara pitched for Soledad and Sanchez Vega added some offense with a two-run homerun.