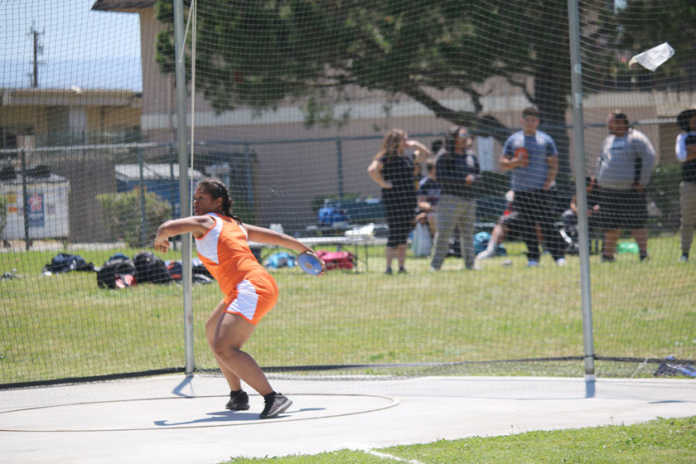 Gonzales High medal winners from the varsity division were: Damian Acosta, third in the 100 meters; Nick Flores, third in the 800 meters 2:17; Pablo Villasenor, second in the shot put 44-11..50 and second in the discus 128-7; Mario Martinez, 35-4. Luis Sainz of Gonzales placed third in the frosh-soph boys triple jump.

Jasmin Yadao of Gonzales placed third in the varsity girls discus with a best of 80-8 and the Spartan 4 x 100 relay team placed third in 54.8. Members of the Gonzales relay team were Alyssa Martinez, Bianca Sanchez, Madisyn Schweitzer, and Athena Landeros. Jazmin Useda won medals in the frosh-soph girls division for placing 2nd in the 1600 in 6:00 and third in the 800 n 2:37. Jackie Ramirez placed second in the frosh-soph shot put with a best of 27-10.50.

Soledad High School won medals in the varsity boys shot put, the 4 x 100 relay team and the 110 and 300 hurdles. Daniel Contawe placed first in the shot put with a mark of 44-11 and Ulises Camarena placed third in the 110 hurdles in 17.4 and second in the 300 hurdles in 48.9 Camarena was a member of the Aztec relay team that place third in a time of 47.0. Camarena relay team members were Miguel Gonzalez, Emanual Ortega, and Daniel Contawe.