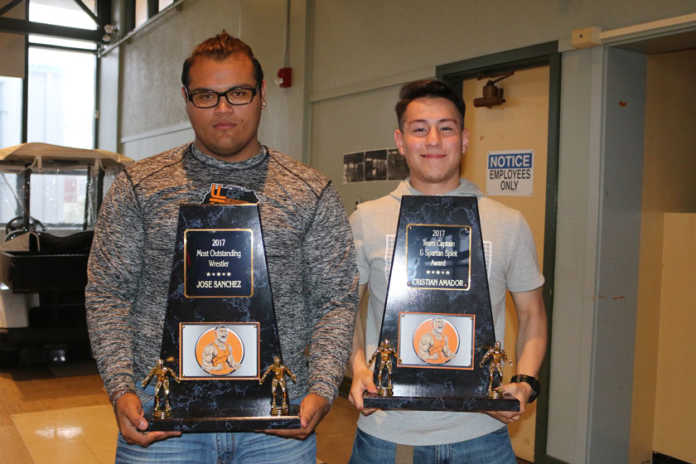 GONZALES — Members of the Gonzales High School wrestling team and their coaches and families gathered for a banquet and awards night last Wednesday in the school cafeteria. Participants sat down and enjoyed a meal of baked potatoes, tri-tip and desserts. The meal was prepared by wrestling parent Jaime Madera.

After dinner head coach Larry Rodriguez and assistant Sandra Rodriguez introduced the team and gave out certificates of achievement and honor student certificates. Wrestlers were praised for their academic work by the high school and the Central Coast Section.

“We had a great year and finished with a 7-0 dual meet record,” said Larry Rodriguez. “Even though we shared part of the title with Pacific Grove after the league finals we did defeat them (PG) in our dual meet. Our team had eight individual league champions and we sent 12 wrestlers to CCS. We also had Jose Sanchez qualify to State for the second straight year and finish with a 2-2 record at the tournament.”

Special team certificates were given to Jesus Mendoza (Outstanding Rookie), and Jose Sanchez (How Do You Like Them Apples). Special team awards were presented to Eric Albarran (Most Improved); Miguel Mendoza (Iron Man); and Robert Ochoa (Coaches Award).

Cristian Amador received the first-ever Spartan Spirit Award for the wrestler that has passion for the sport of wrestling, wrestles for four years at Gonzales, and gives back to the sport. Jose Sanchez received the Outstanding Wrestler Award. Sanchez will be attending Chico State in the fall.