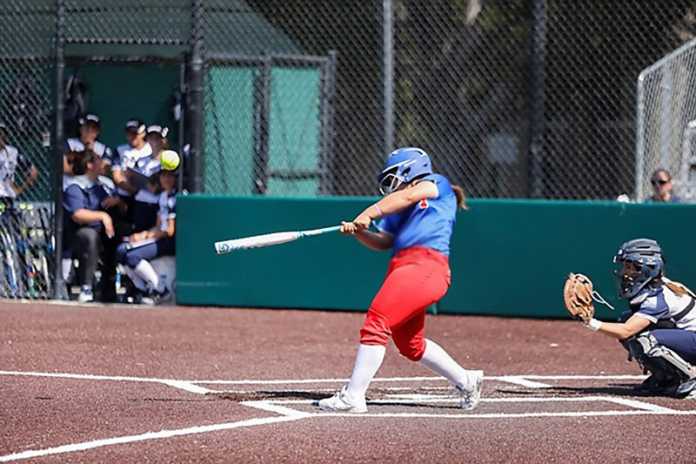 Contributed Photos
Natalie Basuldua helped the Warriors in their record-breaking season. She batted .381 this season as a member of the William Jessup Warrior softball team and earned first-team All-Conference honors.

Basaldua, the 19-year-old daughter of Joey and Lupe Basaldua, capped a productive season at the plate by being selected to the Golden Gate Athletic Conference (GWAC) All-Conference first-team. Basaldua feels she had worked hard preparing to play in the college level.

In her first year of college softball Basaldua hit .267 in 45 at bats. This season Basaldua earned the starting position at third base and finished in the top ten in the GWAC with a .381 batting average and was fourth in the conference with 13 doubles and 40 runs batted in.

“The level of play was a bit more challenging compared to high school or travel ball,” said Basaldua. “I prepared my whole life for this, so I was ready. I prepared myself both mentally and physically before actually stepping on the field for my first collegiate debut. From morning workouts, to practice, to double headers, to Friday and Saturdays to every weekend, it was definitely more time consuming, but its everything I dreamed of since I was a little girl.”

Basaldua’s Warrior team finished with a 31-16 overall record that was an eleven win improvement from the 2016-2017 season. The Warriors defeated the Vanguard University Lions by a 4-0 score in the conference tournament and then lost 2-1 to Hope International University in their second game. The Warriors played the Lions in their third game and won by a 3-2 score. In the conference final the Warriors suffered a 2-1 loss to Hope International.

Basuldua, a four-time All-Mission Trail Athletic League softball player at Gonzales played softball year-round for the Spartans on travel teams and was not stranger to the hard work of a upper level softball.

“We start practicing the second week after school starts,” said Basaldua. “From there we have games and practice throughout the whole school year. The actual season starts around the end of January or the beginning of February. The softball season ends the end of April, but I’ve been very grateful to have participated in the playoffs for the past two years with my team, so the season has been ending during the beginning of May for me.”

In the classroom at William Jessup, Basaldua is completing her general education and wants to earn a Bachelor of Science in Kinesiology. Basaldua has found that work in the classroom is just as much work as on the softball field.

“Academics were challenging but I managed to stay on top,” said Basaldua. “Traveling all the time, practicing every day, and playing games every weekend takes a lot of time away, but I was able to finish the semester with a 3.4 grade point average.”