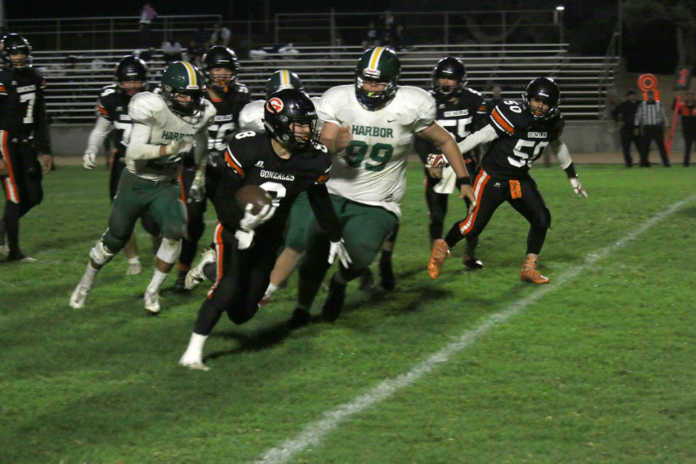 Gonzales led a three-point lead at 15-12 to end the fourth quarter until the four quarter uprising. Five players scored touchdown for the Spartans who finished the season with a 3-3 league record and 3-7 overall record.

“It is just amazing to me that we were just eight points away from having a five and one league record,” said Gonzales first-year coach Arthur Berlanga. “We started league with a one-point loss at Soquel and then we had the lead at Santa Cruz and ended up losing by seven points. In our next game we shut out Marina here at home by a 24-0 score and they could end up being the league champions or co-champs. I am pleased that we won our last game and won three of the last four games. Next year we should be strong with many returning players including about seven or more starters on offense.”

The game started slowly after the Senior Night presentation as the only score of the first half occurred at 7:44 of the first quarter on a 10-yard pass play from quarterback Raul Morales to Giovanny Garcia. A two-point conversion run by Morales and PAT by Jaime Perez put the Spartan ahead 8-0.

Harbor appeared to cut the lead to 8-6 but a touchdown run was called back after a holding call, forcing the Pirates to turn over the ball on downs. The teams took turns punting to each other the rest of the half.

At the 6:14 mark of the third quarter Payton Flores ran for a 40-yard touchdown and the second PAT by Perez had Gonzales leading 15-0. The two-score lead did not last for long as the Pirates scored on a run by Diego Picazo to cut the lead to 15-6. Harbor made the game interesting with a 28-yard touchdown pass reception by Joseph Clouse the cut the lead to 15-12 at the end of the third quarter.

The fourth quarter was all Spartans as Morales scored on a 14-yard touchdown run at the 10:21 mark and Dominic Emery made the score 29-12 with a 35-yard touchdown pass reception from Morales with 4:19 to play. Senior receiver Hernan Mojica scored on a 23-yard run with 3:08 remaining, and Isaiah Banuelos completed the scoring by stopping the Pirates in the end zone for a safety. The Spartans took a knee to end the game with time running out.

Berlanga praised Adrian Hernandez for his play as a defensive tackle and Tony Castillo for his work at defensive end.

GONZALES — Gonzales High School Athletic Director Todd Buller announced that June 30 was his last day with the school, as he...
Read more
Sports