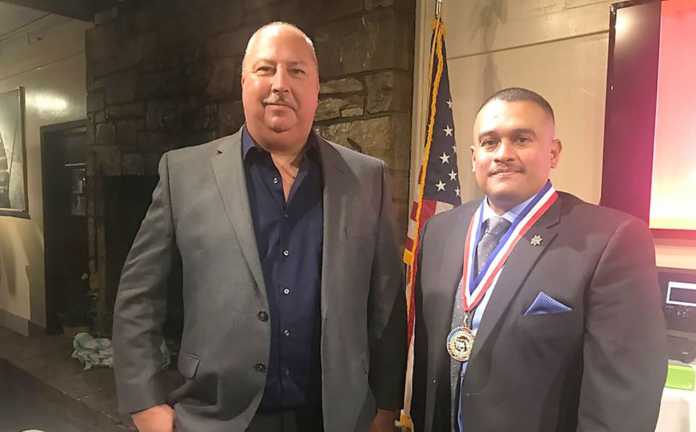 GONZALES — One of Gonzales’ own, Sgt. Santiago Melgoza, was nominated for the Monterey County Veteran of the Year award and won the title this year.

Gonzales Police Chief Keith Wise nominated Melgoza for the award, which was presented to Melgoza at the banquet dinner Nov. 10 in Seaside.

“I was honored that he felt I deserved such an award,” Melgoza said. “When I received the award, I was surrounded by some of our county’s best veterans.”

Melgoza received the Veteran of the Year nomination due to his countless hours of volunteering at various events as well as donating presents to children in the community. Over the past couple of years, Melgoza has purchased toys with his own money and handed those gifts out during shifts.

“My wife helps me out by wrapping all of the gifts,” he said. “I enjoy giving back to my community because I want to leave a positive impression on our community’s youth.”

Melgoza grew up in Gonzales and is honored to now serve the community.

Before joining the Gonzales Police Department, Melgoza served in the U.S. Army Reserve from 2000 to 2008, when he was only 17 years old and a junior at Gonzales High School.

He completed boot camp at Fort Sill, Okla., during his summer break. When he graduated from boot camp, Melgoza returned to Gonzales to finish his senior year.

Melgoza completed his Advanced Individual Training at Fort Jackson in South Carolina and was there when the United States was attacked on Sept. 11, 2001.

He was mobilized to Fort Leonard Wood, Mo., during Operation Enduring Freedom in 2003.