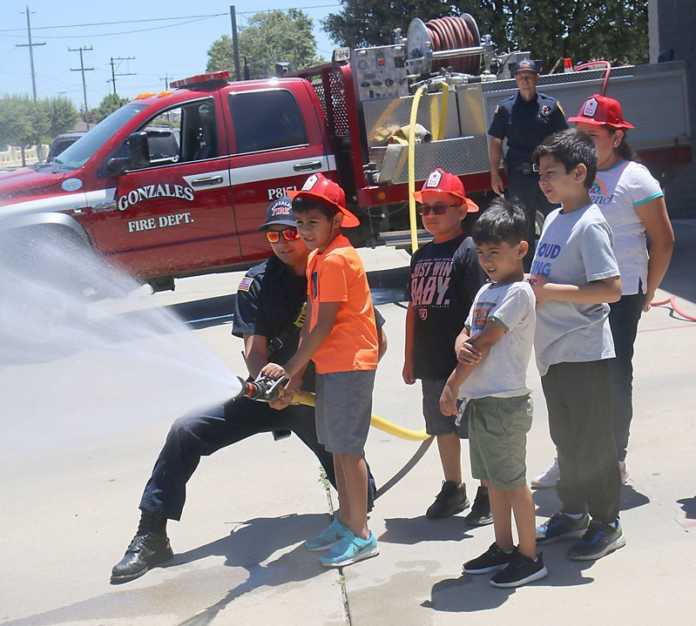 GONZALES — A group of local children visited with members of the City of Gonzales Fire Department last Friday and received a tour of the firehouse as well as orientation to the job of a firefighter.

The children were able to walk in and out of a firetruck and even tried on the 6-pound fire helmets. Each child was able to turn on and run the fire hose from a truck. Vasquez also showed the children how to put on firefighting gear in preparation to fighting a fire.

“All of this gear is important to fighting a fire and staying safe,” Vasquez said. “We have our boots and pants already to go, so we just have to pull them on. By the time we are done, we have on about 50 pounds of gear.”

Vasquez demonstrated how to correctly turn on the oxygen tank and put on the mask that a firefighter must wear when going into a smoky environment. He then took the youngsters outside to see all the tools that a firetruck must have available to fight a fire and the amount of hoses that a truck must have ready at their disposal in case of a large fire.

“There are times we have used up to three football fields worth of hoses or more to fight a fire,” Ferrante said. “We sometimes go to the high school stadium so that we can practice taking out and hooking up the hoses. In a large fire, we have to be ready to use all our hoses and the hoses of another fire department to get to the fire. We have good relationships in our department and we get along well with members from other fire departments.”

Achen compared being a member of a fire department to being a player on a sports team and how much teamwork matters when you are preparing to fight a fire.

“Just like getting along on a football, basketball or other sport teams matters, so does being a firefighter,” Achen said. “We must be able to work with each other and learn that we have each other’s back in any situation that comes up. This all comes from our training in the classroom and preparing by practicing before we have to fight a fire.”