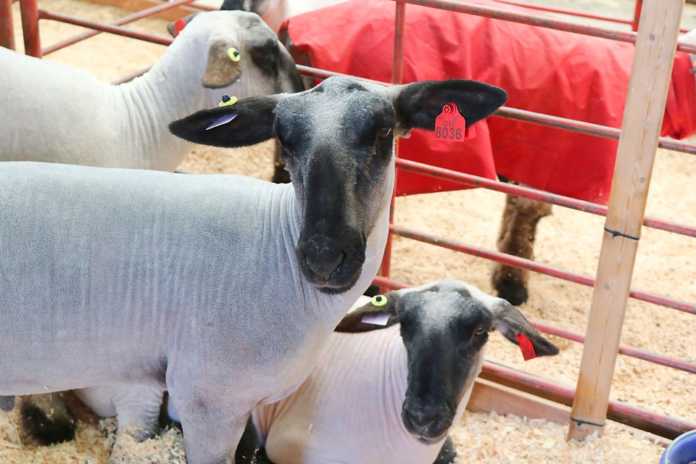 The fair, which ran May 16 to 19 under the theme “Farm to Fable,” once again saw the area’s agricultural and business community come out to support 4-H and FFA members at the Junior Livestock Auction, which grossed $2.2 million on Saturday — on par with last year’s totals. This year’s auction supported youth from five counties and raised funds for local causes.

Notable sales at the auction included two market steers raised by Brooke and Maddison Mullins of Chualar 4-H. Each of the 1,200-pound steers sold for $26 per pound, with the Mullins sisters donating the proceeds — a combined $62,400 — to the fundraiser “Save JT,” set up for a child who was born with Triosephosphate isomerase deficiency, a rare genetic multi-system disorder.

Salinas Valley Fair Heritage Foundation’s livestock animal, a 78-pound market goat raised by Ivan Trujillo of Greenfield FFA, was sold for a record $1,384.62 per pound, raising $108,000 at the auction. The foundation will use the proceeds from the sale for improvements at the fairgrounds.

There was something for everyone during the fair’s four-day run, including the always-popular carnival rides and food booths.

On Thursday, the arena hosted The Farmer 500, featuring amateur drivers from all over the valley. Josh Roberts ultimately won the race and earned the title of “Fastest Farmer in the Salinas Valley.” Also that evening, the Amateur Talent Show wowed audiences at the Steinbeck Stage and paid out $3,200 in prize money, while award-winning wines from the Monterey International Wine Competition were sampled during the Grand Tasting in the Orradre Building. A fireworks show also lit up the night sky in celebration of the 75th fair.

Truck pulls returned to the fairgrounds Friday night and kept the audience entertained well into the evening, as 48 trucks vied for the title of “baddest” 4×4 vehicle. Other events included pro wrestling on the Steinbeck Stage and live music in the Longbranch Saloon.

Saturday, however, was the day most affected by the rains.

“Historically, Saturday is our biggest day for food, carnival and admission sales,” said Salinas Valley Fair CEO TJ Plew. “Our attendance for the day was down 45 percent, which will affect the fair’s bottom line for the year.”

Despite the wet weather, the fair remained open with bull riding in the arena and a concert on the Steinbeck Stage. Fairgrounds staff also gave away more than 200 rain ponchos to guests that chose to stay through the downpour.

“Our tickets read rain or shine, so we made sure we stayed open,” Plew said.

Planning for the 76th annual Salinas Valley Fair scheduled for May 14-17, 2020, in King City is already underway.

Fair competition results can be found inside today’s issue, and view more photos of the 75th Fair in next week’s special photo album in the paper.