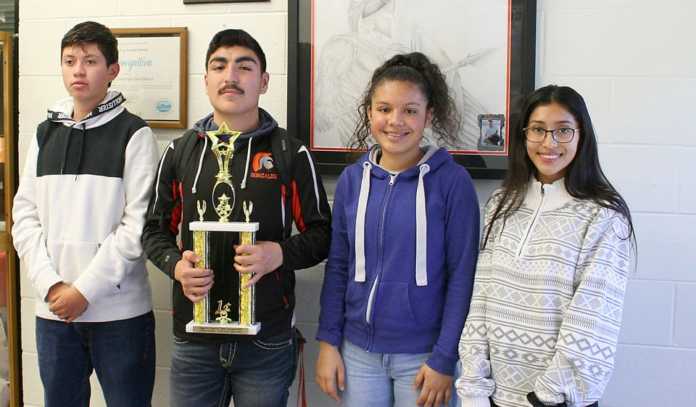 GONZALES — Gonzales High School Migrant Speech and Debate Team took home first place in the Region 16 Contest for the second year in a row on March 16 at Salinas High School.

The Debate Team — made up of senior Jesus Trujillo and sophomores Jacky Chavez, Ana Guerrero and Gerardo Martinez — had been working on the topic of “Two-Way Dual Immersion” programs for the past three weeks. The debate tournament included teams from Salinas High School, Greenfield High School, Soledad High School and Alvarez High School.

“It felt pretty good,” Guerrero said. “We thought we weren’t going to place because Greenfield is really strong and they know how to debate.”

The Gonzales team opted to compete in English, although debates could take place in English or Spanish. The debate is made up of five parts, where each member of the team presented different parts of the argument.

“We all know how to present ourselves,” Chavez said. “Mainly because of the experience we’ve had throughout the Migrant program and the other opportunities that we’ve had as well.”

The debate started with the opener, Martinez, then moved to the cross examiner, Guerrero, who asked questions, followed by the responder, Chavez, who responded to the questions from the opposing team. After the responder came rebutter, Trujillo, who rebutted to what the opposing team said, and closing the debate was the closer, which went back to Martinez.

“We used data that showed the results of people being involved in two-way dual immersion programs,” Martinez said.

The team used data supporting dual immersion students showing strong writing skills and reduced the chances of Alzheimer’s Disease and Dementia. The team had to be prepared for the “con” side of the debate as well and cited the teacher shortage and how expensive the program would be.

“We had a lot of data and numbers backing up that it would be too expensive,” Trujillo said.

The next step for the Gonzales Debate Team is to prepare for the state competition, running from May 3 to 5 in Ventura, Calif.