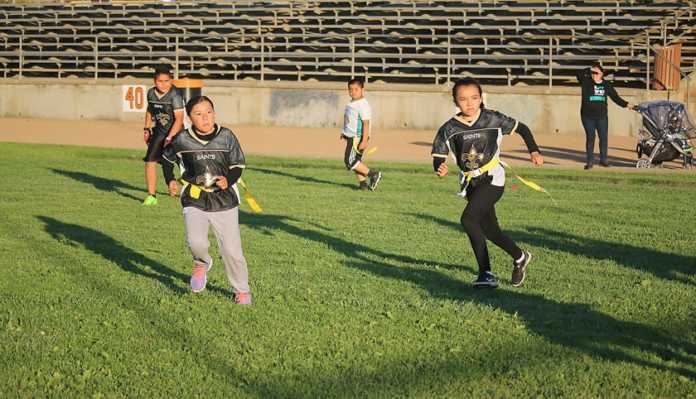 GONZALES — Team championships will be determined this Friday at the Shield Bearers Flag Football League finals at Dick Force Stadium in Gonzales.

In the junior division, the undefeated Titans fill face off for a title at 6:30 p.m., and in the mini’s division the Falcons will play the Vikings at 6:30 p.m.

In games played last Friday in the league tournament, the Saints edged the Texans, 28-26, and the Titans routed the Jaguars, 47-0.

The Texans and Jaguars will battle for third place this Friday at 5:30 p.m.

In the mini’s division of the league tournament, the Vikings beat the Packers, 20-12, in the first game, and downed the Bears, 40-36, earning a spot in Friday’s championship finals game against the Falcons.

In the game to determine the final championship berth, the Falcons defeated the Ravens by a 13-12 score.

On Friday the Bears and Ravens square off to determine the third-place team.

“This has been a good season because we have accomplished the three things we wanted to accomplish,” said league organizer and Gonzales High football coach Eddie Ramirez. “First, the kids were able to develop an interest in football, they improved their football IQ, and they had lots of fun. The players were very competitive, never gave up, and found out how to play in tight games and how to use the skills they have learned in games.”