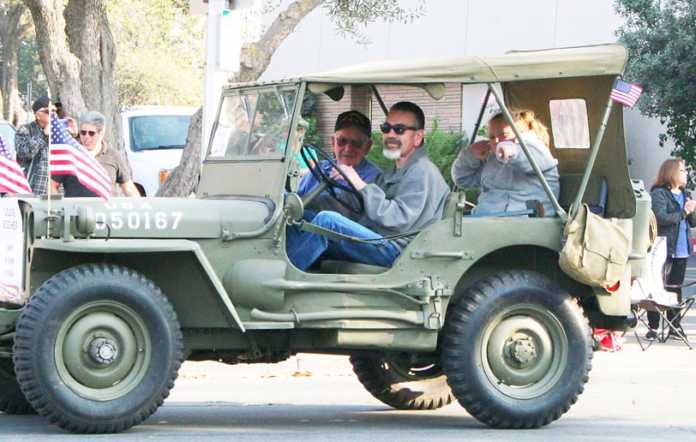 A tribute to veterans

Every year the Monterey County Veterans Day Parade Committee selects a different group to be the group at the front of the parade, and this year the Soledad High School NJROTC was selected to be the color guard.

A local veteran is selected to be the Grand Marshal. Last year was former Secretary of Defense Leon Panetta, an army veteran. This year the Commanding Officer of the Naval Support Activity Monterey, Capt. Rich Wiley, was chosen as the Grand Marshal.

Wiley, who was born and raised in Greenfield and graduated from King City High School, is a Naval Aviator and runs the grounds at the Naval Support Activity base in Monterey.

“This parade is for all the veterans, those who are currently serving, those who paid the ultimate sacrifice and especially for all their family members,” said Tony Virrueta, chairman of the Veterans Day Parade Committee.

Virrueta, a U.S. Army veteran who served as a ranger, and his friend Phil Orozco, a Marine Corps veteran, started the parade eight years ago because they wanted something for veterans to be celebrated in Monterey County.

“This encompasses all veterans from the entire county and it incorporates especially South County,” Virrueta said. “It’s a blessing that it’s grown to its size, with people participating from as far as Fresno, Bay Area and along the Monterey Peninsula.”

The parade is led by a committee of volunteers, veterans and non-veterans, and is a non-profit organization.

The committee still has to pay for things, such as the fire department and police presence, and fulfills their needs by holding fundraisers throughout the year.

One fundraising event was the Veterans Throwdown, in which different veterans competed against each other to see which one served the best barbecued ribs.

Gonzales was also represented in the parade with World War II veteran Louie Escher. The city’s non-veterans representation came in the form of the Gonzales High School Marching Band and the Santa Lucia Chapter of the Daughters of the American Revolution.